“The Space Between The Words” is a group art exhibit.
The group show is comprised of eighteen members of the “Art Salon For Fertile Minds”
who have attended the salon between its inception in February 2011 until March 2015. 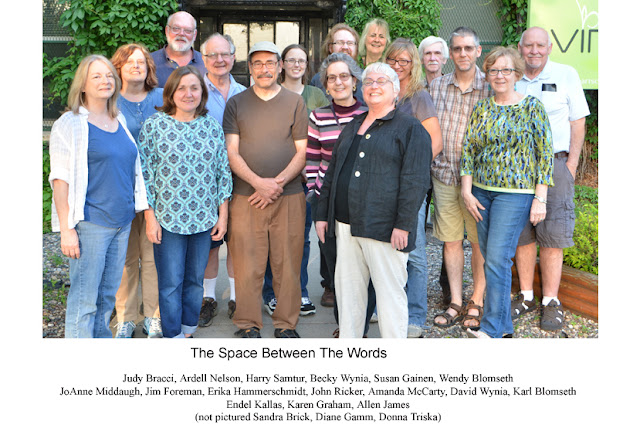 “The Space Between The Words”  exhibit attempts to answer these questions.

“The Space Between The Words” group show is comprised of eighteen members of the Art Salon For Fertile Minds who have attended the salon between its inception in February 2011 until March  2015. It is an opportunity for members to exhibit a body of work that reveals what art we create in “the space” of time “between” the monthly gatherings when we primarily come to the art salon for inspiration and “words” between kindred souls.

The Meet-up social media platform is  used as our primary means of communication with Facebook, as second.  Initially we are strangers who, over time get  to know each other based on the stories we tell of our art endeavors and the conversations in which we choose to engage. Consequently, we see only one aspect of each other but learn to appreciate and respect each others art filled souls that have been created out of a life time of creating art work that has shaped and molded who we are today.

The organizers of the Art Salon For Fertile Minds wish to create a group experience that encourages the members to collaborate, connect and make the time more significant and art filled of an experience when we are together.

The gallery host, the Vine Arts Center is a non-profit arts center, where most of the gatherings have been held.  www.vineartscenter.org

Posted by Wendy Houser Blomseth at 11:05 AM

Email ThisBlogThis!Share to TwitterShare to FacebookShare to Pinterest
Labels: Art Salon For Fertile Minds, The Space Between The Words, Vine Arts Center